Salubria, 2017. Click on the photo and scroll your mouse around to view the photosphere.
© Mark A. Trickett

aralleling the digital reconstruction of Spotswood’s “Enchanted Castle,” I’m just beginning to take the first steps in creating a digital interpretation of Salubria—another property stewarded by The Germanna Foundation.

Salubria is an 18th-century Georgian-style house built by the Reverend John Thompson (rector of the Little Fork Church fro 1740–1772) who built the structure as a testament to his love for his wife, Butler Brayne Spotswood. (Butler Brayne was, of course, the widow of the former Lt. Governor, Alexander Spotswood, who built the “Enchanted Castle.”) Dendrochronology of structural timbers revealed that the house was completed in 1757 and that not only was it the home to Reverend Thompson and the former “Lady Spotswood,” but also with a history of notable Americans such as Daniel Boone and Robert E. Lee (the fame to some is notoriety to others).

The house was donated to The Germanna Foundation in October 2000 by Laura N. Grayson, widow of J. Gordon Grayson.

Why a Digital Reconstruction?

Salubria stands to this day despite the best efforts of the 2011 earthquake that required an emergency stabilisation work to be performed by The Germanna Foundation. So the obvious question is why bother with a digital reconstruction when the structure is still present? There are a number of reasons for this:

The first stage of the project is setting up the various scaled reference images in Blender. Unlike the Enchanted Castle, which only had a proposed front elevation and floor plans based upon the archaeological and historical analysis, Salubria has a broader range of documents to draw from: historical images and, most importantly, architectural drawings created in support of the structure being placed on the National Register. 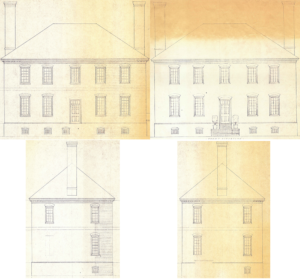 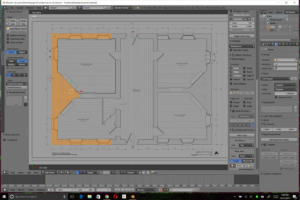 Once the reference images are in, the floor plans are inserted into the Top viewport. Inserting a plane mesh, this is scale to the dimensions of the corner of the wall. After that, you extrude vertices to create edge loops until you reach certain markers. These markers are basically anything that you might need to do something different with, such as a window opening, door opening, a built-in, or the angled hearths in the corner of each of the rooms.

Once you’ve created all of the walls by this process, next up is “growing” the walls into three dimensions. Vertices are extruded in the same fashion as before, though this time we’re looking at features in the various elevations that might need an edge loop. For example, the bottom and tops of doors or windows, decorative elements, and so on. No worries if you miss something: you can always cut some loops later on down the line. It’s just useful to most of these in earlier on as cutting loops later on, when you’ve made modifications to the resultant mesh, can cause a few headaches. 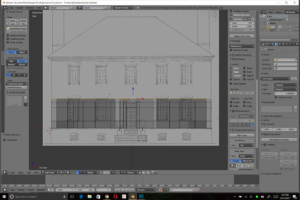 You will note, here, that there is some discrepancy between the placement of the windows and doors from the floor plans to that of the elevations. This is not uncommon, and the elevations are kind of like the Pirate’s Code: more of a set of guidelines than a set of rules that are set in stone.

There’s enough variation between the front (south) elevation and the configuration determined by the plan that I’ll need to take a gander at the reference images. I suspect that is primarily related to the inconsistent creation of edge loops at markers on windows coupled with the fact that the external opening is smaller than the interior opening.