he “Enchanted Castle” is just one of those fun projects that develop organically out of something else. “Something else” in this case was working at The Germanna Foundation as an archaeologist supporting their search for Fort Germanna. As I was preparing for the field season, one micro-project that I worked on was helping them envision what a design for some donor-sponsored wayside signs interpreting the cultural resources stewarded by the foundation could look like. (You can read more about that project, HERE.) What this illustrated, when coupled with visiting the archaeological site, was that there was a lot of potential for taking the archaeological data and producing another visual interpretation. More than that, however, opensource software offers the opportunity to go further. Rather than a 2D image, let’s work with a 3D architectural reconstruction. Rather than leaving that a model that you could create static images or movies from, why not create an open virtual environment that you could explore on the website or with virtual reality hardware?

Thus started the process of gradually building former Lt. Governor Alexander Spotswood’s “Enchanted Castle” in the opensource software, Blender. Before we get to that, however, it’s worth thinking about just how unique this site is. When it was built ca. 1720 it replaced Fort Germanna, a wooden palisaded structure built in 1714, twinned with Fort Christianna to the south, and built on what was then the frontier of British America. The house was huuuuuggggge. At 90-feet in width, it’s comparable to the later-dating structures of Montpelier (which is a little bit smaller), Monticello (also a little bit smaller), and Mount Vernon (a tiny bit bigger), but was built with brick and locally-mined stone. As with Mount Vernon, it had dependencies attached to the main structure through hyphens, and unlike the others, was designed to be a county seat. Town Germanna, which included a gaol, courthouse etc., were all within arrow-shot of the ‘big house.’

All things considered, building a 3D model of the “Enchanted Castle” was greatly simplified by the thesis of Dr. KERRI BARILE. Dr. Barile’s thesis took the archaeological data and produced interpreted floor plans based not only on the archaeological data, but also architectural data from contemporary houses and, perhaps most interestingly, reconstructing the walkthrough of the house by probate officials following the death of Spotswood. (I actually find this to be way cool as it involves grouping listed items by room and then inferring how the people creating the inventory walked around the structure.) 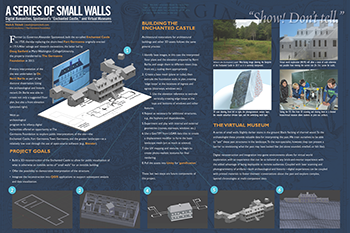 Rather than going into a huge amount of detail as to how the “Enchanted Castle” was built in Blender, the image to the left (or up/down depending on if you’re looking on a small-screen device) is a poster that was submitted to the annual conference for the Archaeology Society of Virginia. Be warned, the image is, like the Enchanted Castle, huuuuuuuggggge. (Well, 14 Mb.)

In subsequent posts on this subject, I’m going to talk less about the simplicity and more about the mess. Specifically, bringing in the real-world landscape so that it will serve as a solid base for subsequent gamification, or opening up the Enchanted Castle and Fort Germanna into a virtual world for exploration.

One of the really great things about working with digital 3d reconstructions is that it’s fairly easy to create variations that explore different thoughts and approaches. As an example, one back-and-forth discussion that was had during the reconstruction of this model revolved around the idea of Georgian symmetry (the front of the house should be symmetric) versus the central chimney base that makes this really hard to make happen.

To explore these options, a number of different models were produced. Which do you think works best?

The next post will explore a fundamental issue when thinking about turning the 3D “Enchanted Castle” into a gameable environment: making the landscape real.