n 2007, I designed the James Madison’s Montpelier Archaeology Field School Syllabus in response to student feedback from the previous two years of field schools. Initially, the document was written as a framework to scaffold discussions with stakeholders, but for various reasons, the curriculum went live in the same year and has remained broadly in the same format since.

The purpose of this post is to critique this initial syllabus by framing it against my current thoughts on instructional design, assessments, and learning theory. Perhaps someday I’ll get to run this syllabus at the field school that I’ve been dreaming about for years (biological anthropology and archaeology combined). 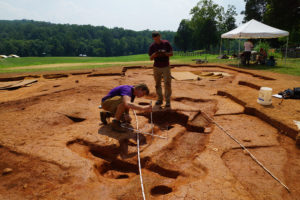 Now, honest warning. I can see this being quite long—it’s not something that I want to drag out in a series, but rather pull the band-aid off quickly in one go. If anything, follow-up posts will be example actions on how these reflections can be utilised to develop a better curriculum design.

If I’m going to do that, though, let me at least give you the quick bullet points of what I would actually change. Then you can read on, or not, depending on what interests you.

So there are the major areas. You can move along (read: flee) now if you want, but for me? I’m going to dive into these a little bit more.

On the face of it, this is just me wanting to make more aesthetically-pleasing products. It doesn’t take much to use dedicated software to produce something that isn’t like reading an Army manual produced on a dot-matrix printer, but it’s more than that. Updating your design brings your A-game because it means that you’re thinking about how your product is going to interact with your clients, which in this case happens to be students.

The original syllabus was, and remains, fairly “old school.” You had your pre-field school readings and assessment, lectures with what amounted to homework, days spent in the field, tours, and a couple of additional lectures on safety/expectations and then background. (The background lecture normally took about 3-4 hours!) While more attention was given to the theoretical underpinnings of archaeology so that the ‘education’ component of the field school was less happenstance and dependent upon the instructor, it was also a syllabus that needed some pretty big changes after year one.

The major change here would be to remove most of the readings, or at least change the delivery format. For example, the ‘safety’ lecture (1 hour) could be shifted into the online space, and the ‘background’ lecture which details some 20+ years of archaeology would also be altered. Rather than a single lecture, the content should be divided into appropriate chunks based upon the current project and the non-essential background relegated to optional content (perhaps bringing in a gamification element).

Drip-feeding the material would also be beneficial, and I would also include synchronous ‘touch point’ such as a webinar to bring everyone to the same page.

The lectures were in and of themselves not a problem, though the perennial question as to whether to have them in the morning (when the students are sleepy) or at the end of the day (when they’re tired) raised its head several times. And that’s kind of an important observation.

The lectures themselves could be better handled with an interactive e-learning courseware. This would leave the time allotted to the ‘lecture’ to work through problems so that the students’ learning was reinforced rather than just merely tested.

The tours served to couple the “power of the place” with information from the pre-field school readings. I would be tempted to explore some different formats rather than the “talking head” moving around the landscape that is the traditional model. A “scavenger hunt,” perhaps, where students are given specific tasks or otherwise work with archaeological techniques such as map-reading? (Many modern archaeologists bemoan the loss of compass/map-reading skills to GPS and Google Maps.)

Overall, though, the changes should be about making the experience less about moving blindly through the landscape while listening to an “expert” and more about making observations and deductions to train the budding archaeologist’s “eye” (reading the landscape is another perishable skill being lost to smartphone technology).

The overall intent of the syllabus with respect to what students were expected to learn was fine, but it did a very poor job in articulating them and a terrible job in actually measuring the success of the course in achieving those objectives. While a part of this is a product of the field school itself, e.g., a historical archaeology field school that only tackles a sub-section of the broader portfolio of archaeological skills, much of it can be laid at the feet of poor design vis-à-vis integrating the different experiences together.

Perhaps the most interesting idea, for me, is potential integrations with the L.E.A.R.N. Online premise. Many of the topics covered in a field school are almost maddeningly brief, so the idea of being able to link this to a broader body of hierarchical learning is very appealing. Creating such a flexible framework would also prevent “myopic” or “one trick pony” field schools that tend to focus only on one thing (e.g., excavation, survey, data analysis, or whatever).